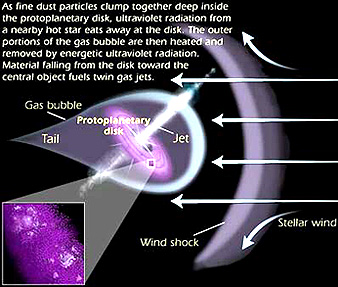 The flow of neutral or charged gas ejected from a star’s upper atmosphere is referred to as the stellar wind. It is distinguished by the less collimated bipolar outflow characteristics of a young star. However, stellar winds are not spherically symmetric.

Stellar wind may be different for each type of star. Post main sequence stars that are on the final stages of their stellar evolution commonly release huge amounts of matter in massive but slow winds. Red giants, red super giants and asymptotic giant branch stars all have stellar winds in this manner. Their winds are driven by radiation pressure on dusts that are condensed in the star’s upper atmosphere. The stellar winds from main sequence stars do not affect the evolution of stars with lower mass.

The stellar winds of massive stars have lower mass loss rates; however their velocities are very high. Their winds are driven by radiation pressure centered on the resonance absorption lines of heavy elements like carbon and nitrogen. Massive stars usually produce high energy stellar wind bubbles.

Even the sun produces its own stellar wind called the solar wind that is driven by its hot and magnetized corona. The solar wind consists mainly of high energy electrons and protons that escape the sun’s gravity due to the high temperature of its corona.

Winds do not blow only in the earth’s atmosphere, winds do blow in stars and the sun too. Imagine how roasted everything could be if a stellar wind would touch you skin when you wake up one day!

Comments - No Responses to “Stellar Wind”