Stellar evolution encompasses the life of a star from its formation until its end. Many astronomers believe that the birthplaces of a star are those molecular clouds of gas located in the spiral arms of galaxies. The life of a star begins when protostars are created from the collapsed dense regions of gas clouds. At this stage, a star is just a large cool mass of gas. 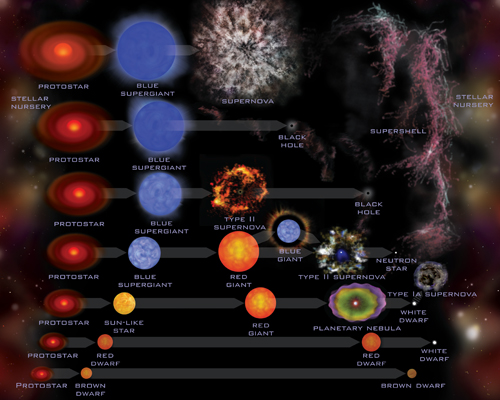 When the gas contracts and subsequently rises temperature until its interior reaches 1 million degrees Celsius. Nuclear reactions start to take place where the nuclei of hydrogen atoms combine with the heavy hydrogen deuterons. This will result in the creation of a nucleus of inert gas helium. It will free large amounts of nuclear energy. When further contractions are halted at this point, a main sequence star like the sun will be born.

After this, a main sequence star will continue emitting light and heat energy until it consumes all of its limited supply of hydrogen in its core. Then it will become redder, larger and luminous as it becomes a red giant star. At this stage, its outer envelopes will collapse and expand consuming nearby objects like planets, meteors and other heavenly objects.

It will continue to collapse its outer envelope and will even intensity its hotness is it exhausts the helium in its core, becoming a red super giant. It will eventually lose all of its mass and will leave a remnant of a hot core of carbon within a nebula of expelled gas. In some instances, the radiation from this hot core ionizes a nebula to produce a planetary nebula. But in most cases, the core of carbon cools down to become a white dwarf, a star that is relatively dim as compared to what it once was, a bright star and this ends its stellar evolution until it becomes black dwarf or a burned out star.

Comments - No Responses to “Stellar Evolution”