In astronomy, physics is an independent field, but it keeps its close relations to the field of space. One term that is widely used in astronomy and also is related to physics is none other than the term called spacetime. 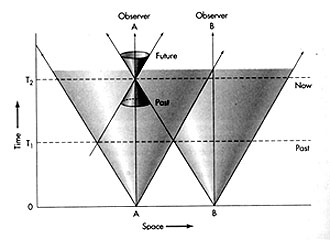 The term spacetime is defined as the model where time and space combines as one entity or continuum. It is said that this concept is usually portrayed as a three dimensional process, with space as the 3rd dimension and time as the 4th aspect, though in a spatial relation.

According to the still referred to Euclidean space perceptions, the universe is composed of 3 dimensions space and a fourth dimension called time. By combining these 2 aspects, many and various physical theories have been proven and simplified. And explaining concepts many theories and principles are made in a uniform manner at both super-galactic and subatomic levels.

In mechanics, since the concept of time is considered as a universal and constant matter, the use of the Euclidean perceptions is usually applied. However, when relativity is talked about, time cannot be separated or used as an independent variable, mainly because a certain objects rate of velocity is relative to that of the time that the said object passes through light. In relation to gravity, it can intensify and affect the speed as to which a certain object passes after a period of time. It greatly decreases the speed of the said object as well.

Comments - No Responses to “Spacetime”