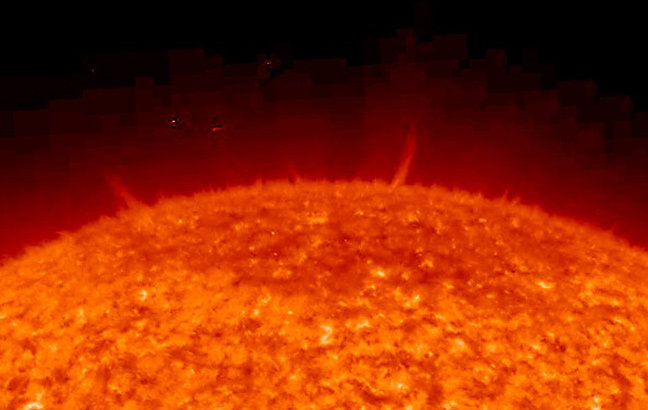 For a period of around 5 to ten minutes, the surface of the sun gets bathed in a burst of energy. These bursts come forth with great consistency and are highly energetic regular fixtures of our Sun. These plasma waves appear as dark tubes on photographs and are known as solar spicules.

Solar spicules are actually regions of intense energy and are associated with intense electromagnetic radiation. At any given time, it is estimated that there are around 60,000 plus spicules that are present on the sun. These high energy regions pack an enormous punch. They can burst onto the sun’s surface at speeds of up to 50,000 miles per hour, reach heights of 3,000 miles and have diameters of around 300 miles.

According to a study done by English astronomers, these spicules could be the result of sound waves originating from within the Sun. The plasma activity inside the Sun creates a sort of cadence which eventually creates shock waves that reach the outer layer or the chromosphere. These shock waves then propel the plasma, resulting in solar spicules.

Not much is known about the effects of solar spicules on activities on earth unlike solar flares which can affect telecommunications and electromagnetic activity, but one thing is for sure, these things are highly energetic objects. This underscores the notion that our Sun is one beehive of ever-changing electromagnetic energy. The source of life on our planet is one hotbed of activity that never ceases to fascinate and teach us new things.

Comments - No Responses to “Solar Spicules”