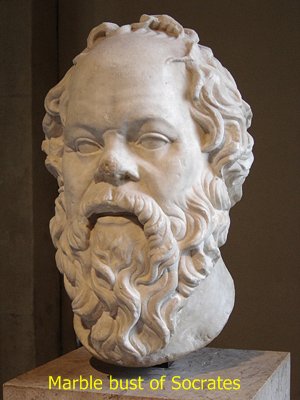 Socrates is practically a household name. This ancient Greek thinker is well known not only in philosophical circles, but by every person who has gone to school. A kind of question-and-answer discourse has been named after him: the Socratic Method. This approach is used in philosophical discussions and in more general forms of idea exchange. It is also used as a way to look at the world, learn, and evaluate things.

While Socrates left no writings of his own, much has been written on him in certain texts. The Dialogues of Plato and the writings of Xenophone (a famous Greek historian) say much about his character and thoughts. Plato, himself a celebrated philosopher, was one of Socrates’ many students.

Basically, the Socratic Method encourages having a two-way dialog, rather than listening to lectures, as a more effective way to learn. This was how Socrates himself taught his students. He spoke with them directly, on an equal footing, and encouraged thoughtful questions. This explains why he left no writings. He preferred face-to-face dialog to more solitary pursuits like writing.

Socrates lived in 469-399 BC. He must have been about 71 years old when he died. A not-very-well-known tidbit from his life is that he was a midwife, in addition to being a teacher and a thinker. He too is believed to have been born ugly and maybe even deformed. He did get married and had children. But his true legacy is his strong passion for truth and knowledge. He had high ideals and was unwavering in their support. This, unfortunately, was what led to his demise. He was put up for trial for his political beliefs. In the end, he chose death over having to give up his ideals and live in a society that frowned on free thinking and free speech.

Lauded by many as the wisest person of his time (and perhaps of all times), Socrates made many contributions to ethics and other fields of philosophical study. His ideas on logic and morality hold great sway up to this day. He gave sage advice on how to distinguish right from wrong, and how to deal with both mundane problems and the more profound questions of life and existence.