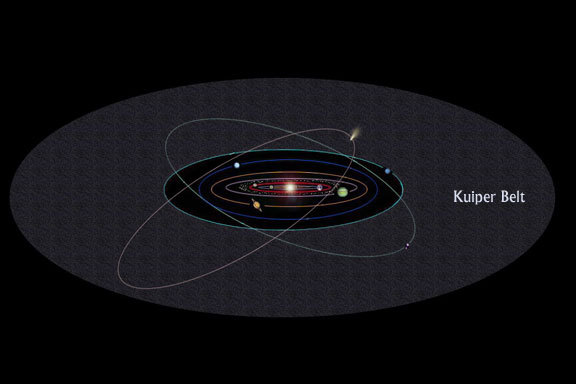 A short-period comet is a comet that has a relatively short lifespan for any observation can be made for comparative studies. That period is known to be shorter than two hundred years.

Recently, short-period comets have been subdivided into the Jupiter-type comets, like that of Temple 2 and Encke, which typically have periods of just twenty years; and the Halley-type comets, with intermediate periods of between twenty to about two hundred years.

Experts believed that the Jupiter-type comets are to have originated from the Kuiper Belt that surround the sun at various distances ranging from thirty to fifty astronomical units, or 7.5 billion kilometers to 4.7 billion kilometers. The outer planets Neptune and Uranus and their gravitational influences is thought to affect some objects within the Kuiper belt occasionally, causing them to be flung and be caught up in orbits which characterizes those belonging to the Jupiter family. Halley-type comets on the other hand, together with those considered to be long-period comets, appear to originate from the Oort cloud.

The life spans of short-period comets are influenced by the loss of gas, rocks and dust every time they swing in their orbits around the sun. Many are visibly split into many pieces, while some disintegrate or fall away. Comet’s lives are calculated to be around ten thousand years. But for the average short-period comet, it only takes two hundred trips for its entire lifetime. Based on every 76-year return of Halley’s Comet, experts calculated that it will only live for 15,200 years before it dies out.