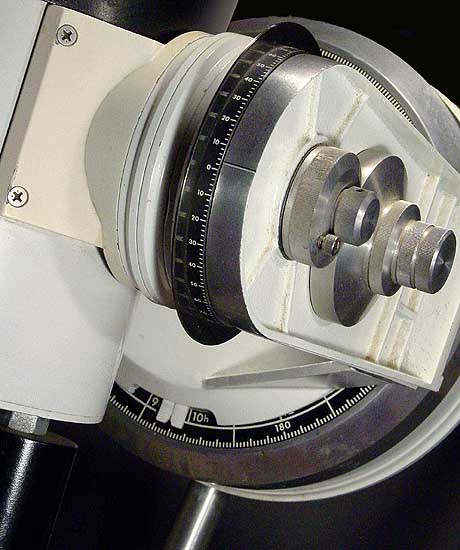 Setting circles are disks used on various telescopes outfitted with an equatorial mount to aid in the
search for astronomical objects anywhere in the sky by referencing equatorial coordinates used in the star charts. It functions by attaching those graduated disks to the right ascension and to the declination axis within the equatorial mount. The disk positioned on the right ascension will be graduated by time, through hours, and even minutes and seconds.

A declination disk on the other hand is graduated into degrees, and then minutes and seconds. Locating any object on the celestial sphere through setting circles is just similar to searches on a terrestrial map using the longitude and latitude values. Some variations on the right ascension circle provide a northern hemisphere scale and southern hemisphere scale.

Today’s applications of setting circles play an important role in astronomy. Research telescopes benefit much from the large diameters of these disks. When combined with a vernier scale, any telescope can be greatly enhanced with its arc minute accuracy.

Portable telescopes are very useful especially with amateur astronomy. And when equipped with such disks, the setup will normally require polar alignment, which is the alignment related either to the northern celestial pole or to that of the southern celestial pole. Setting the right ascension disk after polar alignment is also required. Observers make use of a calculator or any known star in the sky to synchronize the right ascension disk with the sidereal time.

All these functions make setting circles an important component when searching the sky for anything.

Using a Telescope with Setting Circles

Comments - No Responses to “Setting Circles”