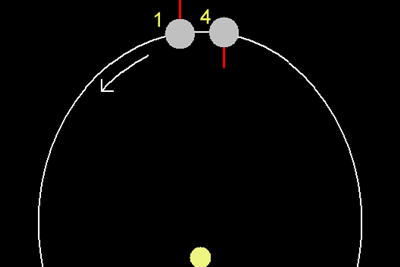 The Rotation period is the time required for a body to rotate around its axis. The lower the period means the greater rotation boost it has. This differs greatly from the planet’s solar day, which would include an extra fractional rotation which is needed to furnish the portion of the planet’s orbital period during one day.

When measuring rotation for solid objects, examples of which are rocky planets and asteroid, the rotation would be considered as a single value. For gaseous or fluid bodies, such as stars and gas giant planets, the period of rotation is different from the equator to the poles because of the differential rotation. The rotation for a gas product is its Rotation period as determined by the rotation of the planets magnetic field.

Earth’s rotation is relative to the Sun which is 86,400 seconds of solar time. Each of these is a little longer than the SI second because of the fact that the Earth’s solar day is longer than it was during the 19th century. The mean solar second between 1750 and 1892 was chosen in 1895 by Simon Newcomb as the independent unit of time in his Tables of the Sun.

These tables were used to calculate the world’s ephemerides between 1900 and 1983, so this second became known as the ephemeris second. The SI second was made equal to the ephemeris second in 1967. While the planet rotates, it is also moving around the Sun. This changes the apparent position of the Sun among the stars, and as a result, it does not move around the sky in quite the same period of time that the stars do.

Comments - No Responses to “Rotation Period”