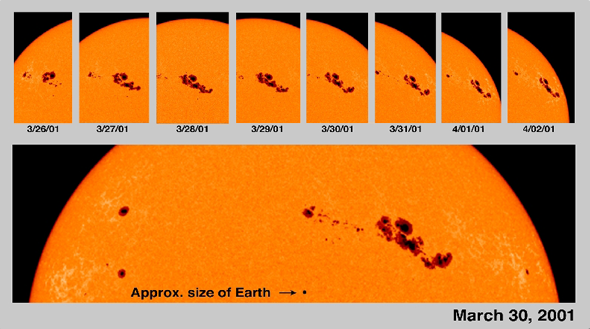 What is the rotation of the sun? Every morning when people see the sun, most have no idea that it is rotating while the Earth and other planets revolve around it. When the Earth rotates, that is when people notice the change between night and day. So that means it takes 24 hours for the Earth to rotate on its own axis. How about the sun’s rotation? Does it take hours like the earth or days like the other planets? What affects its rotation and is it possible for a star like the sun to have different rotations?

The rotation of the sun is measured by astronomers using various features or tracers. One example of these is the sunspots. The sunspots look like dark spots when being observed through a telescope. They are caused by the powerful magnetic activity of the sun. The astronomers would look for these indicators at various parts of the sun and then observe it for hours and days. What they have found out about the sun was quite surprising.

Each part of the sun starting from the equator up to its poles has different rotations. The rotational axis tilt of it is 7.25 degrees counter clockwise. The equator of the sun rotates at about 25 days. In a sixty degrees period, it rotates around about 30 days while at the pole it rotates around 36 days. One will notice that the rotation takes longer the farther it is from the equator.

Unlike Earth, the sun is not solid. In fact, it is made up of gases and plasma. This is the reason why some parts of it rotate faster than the other. Even the interior of the sun does not spin the same way as its exterior. So every time a person would ask, what the rotation of the sun is, you should first say, “Which part?”

Comments - 8 Responses to “Rotation of the Sun”