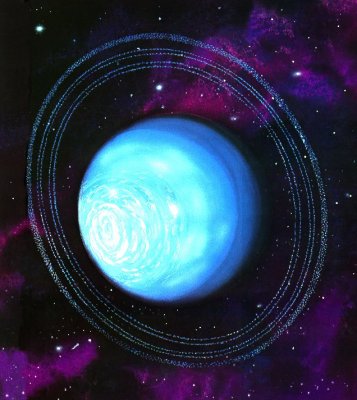 Saturn has the most complex ring system in the solar system while Jupiter and Neptune have faint and simple rings. Uranus rings may not be as extensive as Saturn’s but it is more complex compared to Jupiter’s and Neptune’s. The Uranus rings were first observed more than 2 centuries ago by British astronomer William Herschel. Modern scientists argue whether Herschel actually saw the rings using the available technology at the time because the rings of Uranus are very faint and dark.

It was in 1977 that astronomers confirmed the existence of Uranus rings through the discovery of Edward Dunham, James Elliot and Douglas Mink. After more than a decade, two more rings were discovered by the Voyager 2 spacecraft. In 2003 and 2005, two more rings were observed by the Hubble Space Telescope. To date, there are 13 rings to Uranus.

Unlike other ring systems that were given proper names, Greek letters were primarily used to name the rings of Uranus, particularly the main rings.

Comments - 9 Responses to “Rings of Uranus”