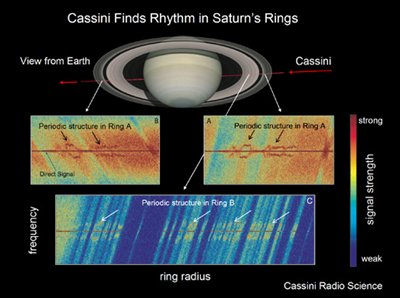 Out of the four ringed planets in the solar system, Saturn has the most complex ring system. The materials that compose the Saturn rings are mostly water ice combined with chemicals and dust particles. The size of these water ice ranges from micrometers to a few meters. The first person to ever observe the Saturn rings is Galileo Galilei in 1610. However, with his limited technology, he wasn’t able to truly understand what he saw. It was in 1655 when Christian Huygens declared that there are disks surrounding the planet Saturn.

It is commonly believed that the rings of Saturn are composed of a series of disks orbiting around the planet with gaps in between. Most of which are caused by Saturn’s inner moons while others have yet to be explained.

The rings of Saturn are divided into 5 main groups: D ring, C ring, B ring, A ring and F ring.

D Ring – It is the ring closest to the planet and was discovered by the Voyager 1 in 1980. Within the D ring, three ringlets were seen: D73, D72 and D68. About two and a half decades after it was discovered, astronomers noticed that D72 moved closer to Saturn by about 200 kilometers and has grown much fainter. It is 7,500 kilometers wide.

C Ring – Is faint especially compared to the A and B rings. This is because it is composed of darker materials than the other rings. It was discovered in 1850 by four different astronomers; William and George Bond, William Dawes and Johann Galle. It is 17,500 kilometers wide.

B Ring – It is the largest, brightest and has the most mass among Saturns rings. It is estimated that nearly all of the sunlight that passes through the B ring is reflected. Very little is known of the B ring with regard to its irregularity of its brightness and density. It is 25,500 kilometers wide.

A ring – There are 2 gaps within the A ring: Encke gap and Keeler gap. It is separated from the B ring by the Cassini Division and its boundary is near Atlas’ orbit.

F ring – It is the outermost ring of Saturn undergoing changes every hour. It is also the thinnest ring with an estimate 30 – 500 km in width.

Comments - 8 Responses to “Rings of Saturn”