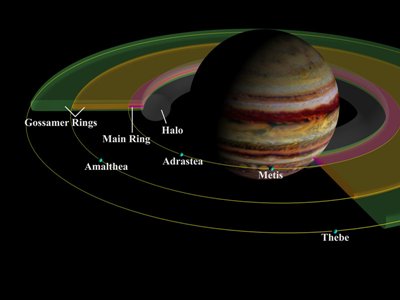 Jupiter Rings, or the Jovian Ring System, is the third planetary ring system to be discovered after Saturn and Uranus. It was first seen by astronomers through the Voyager 1 space probe in 1979. After a decade, the Galileo orbiter was sent to further investigate the rings. Since then, it has been studied with the help of the Hubble Space Telescope by astronomers.

There are four different components that comprise Jupiter rings: the Halo ring, the Main ring, the Amalthea gossamer ring, and the Thebe gossamer ring. The halo ring is composed of thick particles, the main ring is the brightest but thin and the two gossamer rings are wide and thick but faint. The gossamer rings were named after Jupiter’s moons Amalthea and Thebe, where the materials came from.

The main ring is more than 122,000 km radius, 6500 km wide and is 30 – 300 km thick. Adrastea, Jupiter’s smallest moon, orbits in the same place as the main ring. The main ring is noted for its brightness but it depends on where it is viewed. The brightness of the main ring decreases as it moves closer to Adrastea’s orbit and is most bright near the center.

The halo ring is the thickest, vertically, out of the four rings. It has a radius of 92,000 km to 122,500 km, a width of 30,500 and a thickness of 12,500 km. It becomes thicker the closer it is to Jupiter. Astronomers believe that the halo ring is composed of tiny dust particles. This is used to explain the color and composition of the halo.

Comments - 10 Responses to “Rings of Jupiter”