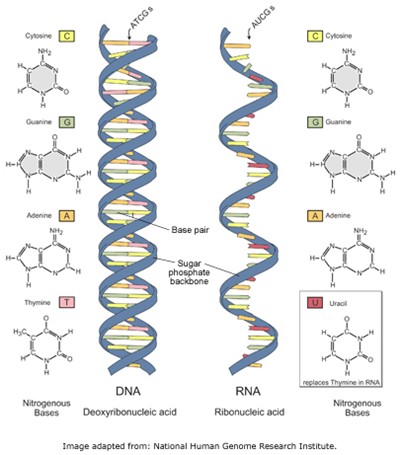 One of the three major macromolecules along with DNA and proteins is Ribonucleic acid (RNA). These are essential for all forms of life.

RNA is made up of nucleotides, and each nucleotide consists of a nucleobase which is also known as a nitrogenous base. Nucleic acids were discovered in 1868 by Friedrich Miescher, who has called the material ‘nuclein’ since it was found in the nucleus. Later on, it was actually discovered that even prokaryotic cells, which do not have a nucleus, might also contain nucleic acids.

The role of RNA in protein synthesis was first seen in 1939. Severo Ochoa won the 1959 Nobel Prize in Medicine after he discovered how RNA can be synthesized. The sequence of the 77 nucleotides of yeast RNA was found by Robert W. Holley in 1965, this enabled Holley to receive the 1968 Nobel Prize in Medicine. Some RNA molecules play a very active role in the cells by catalyzing biological reaction and also in controlling gene expression.

The current purpose of RNA is to facilitate the replication of DNA by transferring information from the DNA to proteins. RNA consists of chains of up to a few thousand nucleotides. Each nucleotide has phosphate and ribose as one of four bases. All bases have flat ring like structures. As a matter of fact, there is a close relationship between DNA and RNA. It is even possible that historically, RNA plays a role in the production of DNA.