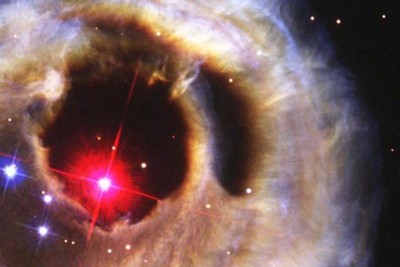 The biggest stars in the universe are called red supergiants. To get a picture of how huge these stars are, just imagine being able to fit 1800 suns into one red supergiant or imagine the sun growing so much that it already reaches the orbit of Saturn. But their superiority in size does not mean that these are stars have the most mass. In fact this stage in the life of a star occurs when a star such as the sun begins to decline.

Stars with 10 solar masses become red supergiants once they have used up their fuel source which is usually made up of hydrogen. Once this happens, the stars turn to other sources of fuel such as helium, which does not produce as much energy. As a result red supergiants have very cool surface temperatures that range from 3500-4500 K. As the star progresses on its evolution, it fuses heavier elements together until such a time when iron builds up in its core – this marks the life of a star that is at its very end. A red supergiant will take about a few hundred thousand years before it reaches this stage.

The largest known red supergiant is VY Canis Majoris, while the most popular is Betelgeuse. Betelgeuse belongs prominently in the constellation Orion and is part of the famous winter triangle seen in the night sky. This star is found to be about 370 times larger than the sun with a luminosity that is 10,000 times brighter.