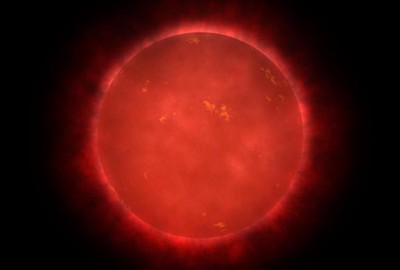 When you look at stars in the night sky, it appears like they are just tiny dots of light that look the same. However, they are millions of lights years away, stars look very different from how they appear at night. They are in fact classified into several types according to their size, temperature, and brightness.

Currently there are seven main types of stars based on their temperature, O, B, A, F, G, K, M. Depending on their mass and stage of development however; stars may be classified as either dwarf stars or giants. Based on this grouping, scientists have found out that the most common stars in outer space are what they call red dwarf stars.

Red dwarf stars get their name because of their relatively smaller size and mass than the sun. These stars are known to have only a little less of the half of the weight of the sun. Their small size enables them to live for a very long time because they burn their fuel very slowly. However, because they burn only a little bit of fuel, red dwarf stars are also cooler compared to other stars and thus isn’t able to shine as brightly. Typically these stars only have a temperature below 4,000 K resulting in a faint light.

Though quite numerous in outer space, it will be very hard to see red dwarf stars in the night sky because of their small size and the faint glow that they give off. Probably the most popular red dwarf is the Proxima Centauri.