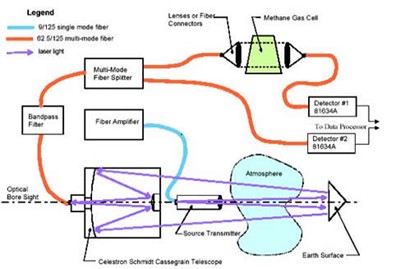 A radiometer is a device used for measuring different types of electromagnetic radiation or energy that exhibit wave-like properties. All objects that have a temperature beyond absolute zero are able to radiate this type of energy into the space surrounding them. This is also true for objects found in space such as stars and even whole galaxies. That is why astronomers have developed ways in order to measure the intensity of the electromagnetic radiation given off by astronomical objects in a field known as Radiometry and a radiometer is one of the tools utilized in this area.

Currently there are different types of radiometers, each with its own way of detecting and measuring electromagnetic wavelength, but the most popular model still remains to be the Crookes radiometer. Made in 1873 by a physicist named Edward Crooks, this model is one of the earliest to have been used. It is made of a spindle fitted with a rotor and a set of vanes inside a partial vacuum. The vanes, which are painted silver on one side and black on the other, rotate upon exposure to light. This motion is commonly explained by physicists as the result of the heat generated upon absorption of the blackened side of the vanes of the photons from the light. The Crookes radiometer is used to provide a quantitative measurement of electromagnetic radiation. In principle, the more intense the light is that hits the vanes, the faster the rotation will be.

But as popular as the Crookes radiometer is, its use has been usurped by newer models such as the MEMS and Nichols radiometer which tend to be more diverse and sensitive in measuring electromagnetic radiation.

Comments - One Response to “Radiometer”