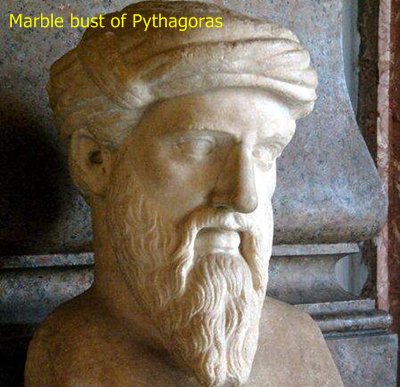 Pythagoras lived between 569-475 BC. He holds the distinction of being the first “pure mathematician.” It is unfortunate that no writings of Pythagoras have survived (although it is uncertain if he did ever write any), but he made very significant contributions in the development of mathematics.

Pythagoras was a mathematician, but he was also equally into philosophy and religion. At one time, he did political work too, but he was not happy with it. He founded a school of philosophy, which taught, among other things: numbers, symbols and their mystical significance; and the idea that reality is mathematical in essence. His students and the school were very idealistic and disciplined; they were mostly vegetarians and they had no personal possessions. They later came to be known as the Pythagorean Society. To this day, there are groups and organizations that call themselves Pythagorean.

Also bearing Pythagoras’ name is a famous mathematical theorem used in solving triangle equations. This theorem, which is still being taught in high school and college today, holds that the square of the hypotenuse of a right triangle is equal to the sum of the squares of the other two sides. Other geometric theorems or discoveries attributed to Pythagoras or to Pythagoreans involve:

– geometrical algebra
– irrational numbers
– plane and solid figures
– theorems that further describe angles in a triangle, and the sides and angles of polygons
– theorems on how to compute areas
– orbits of the Moon, Venus as both the evening star and the morning star, and other astronomical findings.

Pythagoras was also deeply interested in the study of music. He was, in fact, an accomplished lyre musician. He found correspondences between music and mathematics, as he discovered, for example, certain ratios of the lengths of strings on musical instruments that produced the best harmonies. As such, Pythagoras made valuable contributions in the development of the mathematical theory of music.

He saw numbers and mathematics as an underlying essence of music and all things in the universe. Some of his ideas are today considered unorthodox, such as the idea that numbers have personalities. But many more of his ideas have now become very familiar; the concepts of odd and even numbers, and of perfect numbers, were all first developed by Pythagoras.