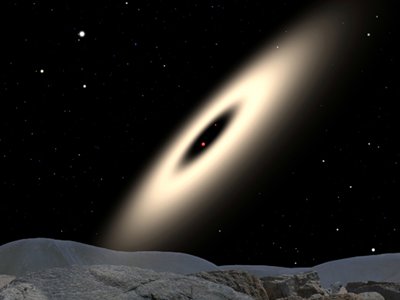 In astronomy, the term protoplanetary disk refers to the circumstellar disk of space matter, composing of space dust, different types of gas, specifically the types of nitrogen, hydrogen or other elemental gas. It is said that this type of astronomical marvel is the basis or essential structure for forming planetary systems, and eventually galaxies.

The speculation about this celestial body exists even long before. The existence of these systems was confirmed in 1994 when Robert O’ Dell and his co-workers from the Rice University, through the use of the Hubble Space Telescope examined newborn stars in Orion Nebula.

According to the theory, it requires at least ten million earth years for a planetary system to be fully established and planets to fully form, through the combining of gas and dust clumping or forming together as one. In 1999, a certain protoplanetary disk was found in the Taurus portion of the galaxy, and it seemed that 6 young planets are surrounded by space gas and dust, indicating a formation of a new star system. Apart from this, it was also concluded that since the said disk was near the solar system, it also means that another star system can form at any time, in between another star system as well.

Furthermore, the protoplanetary disk is said to have a mass of 0.01 to 0.1 solar mass according to results found on newborn planets or stars. On the contrary, the results gained a discrepancy since the mass of a certain star system varies according to cumulative planetary and star masses.

Comments - No Responses to “Protoplanetary Disk”