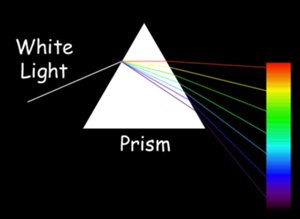 In science, there will always be the term prism, especially when the field of optics is involved. A prism is an optical equipment with a transparent color, a flat, triangular shaped, and polished surface, which refracts light.

Depending on the application, the exact angles between each surface differs. Traditionally, a prism is that of a triangular prism, with a triangle shaped base and rectangular sides. Most prisms are made of glass, though it can also be made of other transparent material, equal to the wavelength to which they are meant to be used.

It can be used to break up light to its equivalent spectral colors, which include the colors red, orange, yellow, green, blue, indigo and violet. It can also reflect light or even split light into various wavelength.

Prisms work in dependence to light. As the speed light changes from one medium to another (e.g. light from air and into the section of the prism), it then causes light to be refracted and then enter the new medium, this time at a different angle or view. This is the basic principle of using a prism. Aside from this, the angle or the bending level of the light is hugely dependent on the angle where the light hit the object, and also varies in terms of wavelength due to the refractive ratio of the two light gathering objects.

There are also other types of prism: namely, the dispersing, grating, reflecting and polarizing types. The dispersing prism is the common type, where it breaks light into spectral colors. Grating prisms are used for light diffraction or splitting. Reflecting prisms are used in binoculars to reflect light. And polarizing on the other hand is used for splitting light into different spectrums.