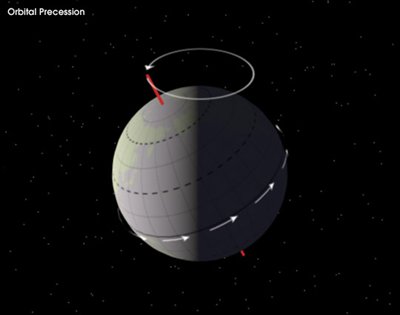 The term Precession is usually associated with the fields of Physics and Astronomy. It is usually defined as the change in orientation of the rotational axis of a certain object or celestial body. Also, this term in astronomy refers to the many slow, continuous and gravity dependent changes in direction of a body’s orbital conditions, and is most applicable to the changes in the planet Earth’s equinox.

Precession has types. In Physics, these are none other than the Torque-Induced and Torque-Free classes. In the Torque free type, it refers to the occasions when a certain body’s rotational axis goes off slightly from the position that the object can rotate in a balanced and free motion. It usually involves a maximum or minimum principal axis, most commonly known as the rotational inertia. Torque Induced or gyroscopic precession on the hand, is the phenomenon when a certain rotating object suddenly wobbles when torque or force is applied. To put it simply, when an outside force acts on a rotating object like a spinning top hitting a hump on the surface it was used, the top wobbles and goes off-balance.

In astronomy, these types of precession apply, but only as an application or theory. The types of astronomical precession are namely: Axial, Ecliptic and Perihelion Precession. Axial Precession is the movement of a celestial body’s rotational axis, in the manner that as if it was making a cone shape. Ecliptic alternatively, refers to the planet’s orbital inclination drifts up or down. And Perihelion is the type of precession that combines both the axial and ecliptic types. The only difference is that it refers to the direction of orbit around the sun.

Comments - No Responses to “Precession”