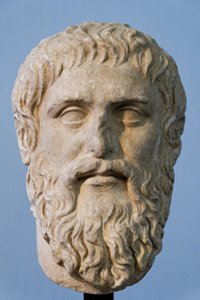 Plato, was a famous ancient philosopher who lived in Athens, Greece from 427 BC to 347 BC. He lends his name to the word “platonic,” however, Plato was probably not his real name, but was merely a nickname. “Plato” meant “broad,” possibly an allusion to his wide shoulders or forehead, or to the wide scope of learning he possessed. His real name is said to have been Aristocles, after his grandfather.

Plato is best known for his written work entitled The Dialogues. He spoke of conversations he had with Socrates, his mentor, as the main character. But the conversations did not include any character named Plato. The dialogs may have actually reflected Socrates’ ideas, or perhaps Plato’s own. Because of the indirect style of the writings, no one can know for sure. Neither Plato’s actual or original philosophies are spelled out clearly, but the writings do give an indication of his leanings. This as much can be said: Plato pursued many fields of knowledge, including geometry, mathematics, politics, the arts, education, and of course, philosophy. He tackled questions having to do with ethics, the nature of man, the universe, reality, and mind.

A great accomplishment of Plato was the Academy–a school he founded in about 387 BC and presided over until his death. This became a famous institution of learning. It taught philosophy, mathematics, arts, drama and the sciences, and encouraged research. (As a side note, the word “academy” comes from Academus, a hero in Greek mythology, who lived near Plato’s Academy, Hekademeia)

Before being a full-time scholar and academician, Plato served twice in the military and took part in the wars of his time. He found the life of a soldier distasteful, and preferred to be a politician. A turning point for him was the execution of his mentor Socrates. This convinced him to abandon Athenian politics altogether. He traveled to Egypt and parts of Sicily and Italy, where he studied, developed, and shared his philosophy.

During his travels, he was especially impressed with the mathematician-philosopher Pythagoras. When Plato returned, he established the Academy. This flourished for centuries, until 529 AD. Then it was accused of being a pagan institution, which led to its closure. But the Academy did continue, for 900 years, making it the longest-running institution of learning of all time.