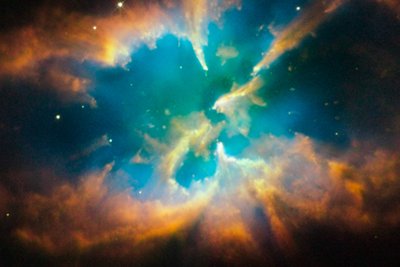 A planetary nebula is not a planet, although its name often gives that initial impression. It is actually the accumulation of gas and plasma given off by a star that is about to bade farewell to the universe. They are so named because their appearance through a small optical telescope closely resembles a giant planet. The man who coined the name, William Herschel, saw the first planetary nebula in the 1780s and was reminded of the greenish disk of the planet, Uranus.

Not all stars get to bow off in a fantastic display of planetary nebulae. Only those that are of low to medium mass—like our very own Sun—can create this type of spectacle when they die. Planetary nebulae don’t really last long compared to all other astronomical objects, but long enough to span a thousand generations of human life.

So, how does a planetary nebula form? It begins when the start reaches its Mira stage or that stage in its life when it turns into a pulsating red giant. The gradually increasing instability of this dying star eventually leads to its outer layer being expelled by the combined forces of strong stellar winds and the star’s own pulsations. The hot, but dead stellar core that is left behind emits ultraviolet radiations that cause the expelled outer layers of the star to radiate, thus forming a planetary nebula.

Planetary nebulae hold a very important role in the evolution of the universe. As they merge back into the interstellar space, they hand out generous amounts of the heavy elements they contain (carbon, nitrogen and oxygen) to the formation of new stellar lives.

Comments - No Responses to “Planetary Nebula”