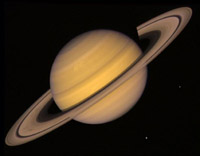 1. Saturn is the sixth planet from the Sun and the second largest.

2. Saturn was the god of agriculture in Roman mythology. Saturn is also the father of Jupiter, the king of the Roman gods.

3. Saturn is flattened at the poles, due to a fast rotation on its axis.

4. Saturn has 62 known moons, fifty-three have been named. Most of them are small in size.

7. Saturn is the only planet in our solar system that is less dense that water. This means that it would float if there was a body of water large enough to hold it.

13. Saturn’s rings are made primarily of “water ice” mixed with dust and other chemicals.

14. Saturn’s fame has been observed going back to ancient times, the Babylonians, Romans, Greek, Hindus, and many more ancient civilizations have taken great interest in studying this ringed planet.

17. Titan is Saturn’s only moon that has an atmosphere, it is also bigger than Mercury.

18. The first astronomer to make note of Saturn’s rings was Galileo, although his telescope was not powerful enough and he thought that the rings were actually satellites.

19. Saturn’s rings are made of water, ice, rocks, dust and other chemicals.

20. Pioneer 11 did the first flyby of the planet in 1979. Since then, Voyager 1 was sent closer to Saturn and it took much higher quality photographs.

21. In 2004 the Cassini-Huygens space probe entered into orbit around Saturn and also took vivid photos of some of the planet’s moons.

22. The day of the week, Saturday, is named after Saturn.