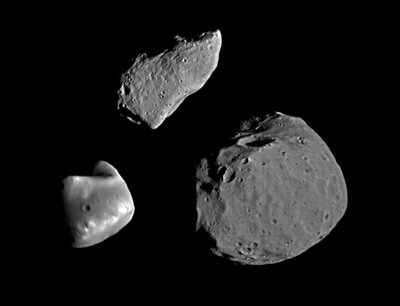 Two very small moons orbit around Mars – Phobos and Deimos. These moons are classified as minor satellites, meaning Mars have small moons compared to other planets in the solar system. Besides being small, Phobos and Deimos are also irregularly shaped and resemble asteroids more than moons.

In 1959, rumors spread that Mars’s moons are actually artificial satellites. This was started when Walter Scott Houston published an article in the Great Planets Observer as an April fool’s joke. According to Houston, a Dr. Arthur Hyall of the University of Sierras discovered the true nature of the two small moons. Of course, Dr. Hyall and the University of Sierras didn’t actually exist. However, IIosif Shklovsky, a scientist from Russia, agreed with the article giving Houston’s article worldwide attention. It was nothing but a giant hoax that went out of proportion.

Both Phobos and Deimos were discovered on August 1877 by Asaph Hall, an astronomer at the US Naval Observatory in Washington D.C. Hall first discovered Deimos on August 12, 1877 and Phobos 6 days later. A Science Master from Eton College in England named Henry Madan suggested the name “Phubus and Deimus” after the entities of Fear (Phobos) and Dread (Deimos) summoned by Ares also known as the Roman god of war, Mars.

Phobos – Has a radius of 11.1 kilometers and is the larger Martian satellite. It orbits closely around Mars and it moves even faster than Mars can rotate on its own axis. It rises in the west and after a little more than 4 hours it already sets on the east. According to scientists, the orbital radius of Phobos is steadily decreasing and it’s only a matter of time until it is either fragmented and forms a planetary ring or it clashes with Mars.

Deimos – Has a radius of only 6.2 kilometers. Some scientists theorize that Deimos, like Phobos, were asteroids that got pulled into Mars’s orbit due to the gravitational force of the red planet. These are two large craters on the surface of Deimos that measures 3 kilometers each – Swift and Voltaire.

Comments - 3 Responses to “Phobos and Deimos – Moons of Mars”