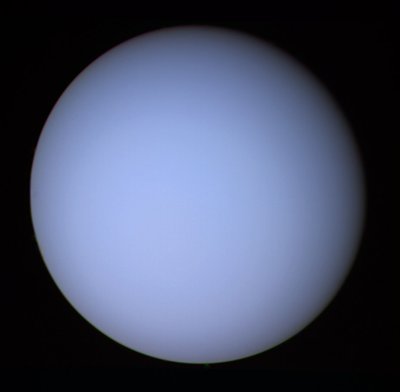 Uranus makes its way around the Sun once every 84 years (a year on Uranus is equivalent to 84 Earth years). Its average distance from it would be around 3 billion km. The intensity of the sunlight that reaches the planet is about 1/400 of that on Earth.

Back in 1783, Uranus’ orbital elements were first calculated by Pierre-Simon Laplace. Discrepancies were soon discovered over time and in 1841, John Couch Adams stated that these differences could be due to the gravitation tug from an unseen planet. Urban Le Verrier began his independent research into the Uranus’ orbit in 1845. It wasn’t until 1846 that Johann Gottfried Galle found this formerly unseen planet which was named Neptune.

The rotational period of Uranus’ is 17 hours and 14 minutes (compared to Earth time, a day on Uranus is approximately 17 hours and 14 minutes). However, just like on the other giant planets, it also experiences relatively strong winds going in the direction of its rotation. In some latitudes, such as the region, which is two-thirds from the equator to South Pole, there are features of the atmosphere that are visibly faster in terms of movement thus making full rotation within 14 hours. The planet’s axis of rotation located on its side on the plane of the Solar System and has an axial tilt of 97.77 degrees.

This axial tilt would give the planet seasonal changes that are very different from those of the other planets. When the Uranus solstice draw near, one pole would continuously face the sun whilst the other would face the other way. Only a strip of area around the equator would go through a rapid day-night cycle and the sun would be very low on the horizon, much like what the Earth’s Polar Regions go through.

Comments - 13 Responses to “Orbit and Rotation of Uranus”