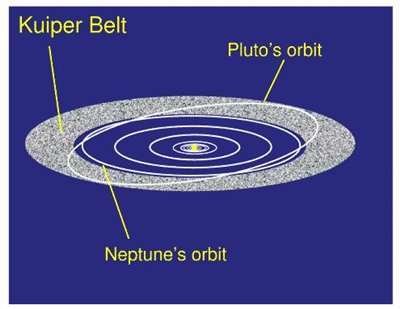 The average distance between the Sun and Neptune is 4.55 billion km, and Neptune completes its orbit every 164.79 years; a year on Neptune is 164.79 Earth years. Despite this fact, it never appears in the same position in our sky because the Earth would have rotated in a different location during its 365.25 day orbit. Neptune’s elliptical orbit is inclined at 1.77 degrees when compared to our own planet. Because of its 0.011 eccentricity, the distance between Neptune and the Sun often varies by around 101 million km between the perihelion and aphelion, which are the nearest and the farthest points of the planet from the Sun along its orbital path, respectively.

Neptune’s axial tilt is 28.32 degrees, which is similar to the Earth’s tilts as well as that of Mars. As a result, Neptune would often experience seasonal changes that are similar to ours. However, the planet’s long orbital pretty much means that the seasons last for about forty Earth years at a time. Its sidereal rotation or day lasts for about 16.11 hours; a day on Neptune is equivalent to 16.11 Earth hours. Because of the fact that its axial tilt is similar to that of the Earth’s the variations in the length of its days don’t get any more extreme. Also, since Neptune is not a solid body, its atmosphere also goes under differential rotation. In fact, it has the most pronounced one in the entire Solar System.

Neptune’s orbit actually has a profound impact on regions that lie directly beyond it. This region is known as the Kuiper belt. This ring of small icy worlds is dominated by Neptune’s gravity in the same way that Jupiter dominates that of the asteroid belt thus shaping its structure.

Comments - 12 Responses to “Orbit and Rotation of Neptune”