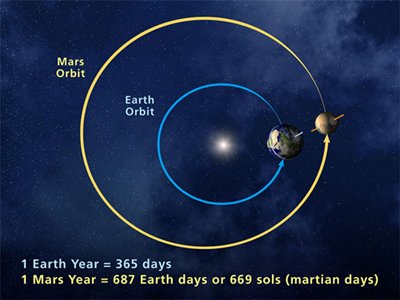 Mars distance from the Sun is 230 million km and its orbital period is equal to 687 Earth days. For this planet, the solar day is only a bit longer than that of the Earth’s day which is 24 hours, 39 minutes and 35.244 seconds. An entire Martian year would equal 1.8809 in Earth years.

Mars’ axial tilt is 25.19 degrees, which is quite similar to that of our own planet and in this way, seasons in Mars are very much like the seasons that we have here on Earth. However, on Mars, they are almost twice as long because of the fact that the planet has significantly longer years compared to us. At the moment, the orientation of Mars’ North Pole is close to Deneb.

The planet has passed its perihelion in April 2009 and its aphelion in May 2007. It would reach its next perihelion in May 2011. Mars has a rather pronounced orbital eccentricity, which is about 0.09, compared to the other planets in the Solar System. The only other planet that shows greater eccentricity would be Mercury. For the last 35,000 years, Mars’ orbit has grown even more eccentric due to the gravitation effects that the other planets have on it. In fact, the closest distance between our planet and Mars would continuously decrease for the next 25,000 years.

As for its moons, Mars has two tiny natural ones. Phobos and Deimos orbit quite close to the planets. Currently, from what scientists know of their composition, it is believed that both moons were captured asteroids but this has never been completely ascertained nor confirmed.

More about the Planet Mars

Comments - 6 Responses to “Orbit and Rotation of Mars”