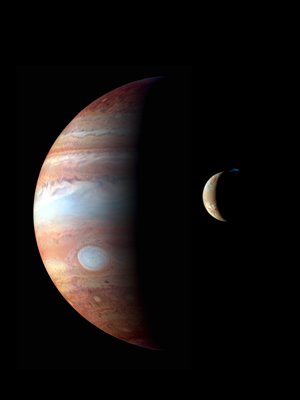 The only planet whose center of mass in relation to the Sun lies outside the volume of the Sun is Jupiter. The mean distance from the Sun to Jupiter is 778,000,000 kilometers. It takes Jupiter 11.86 years to orbit around the Sun, so a typical year on Jupiter is 11.86 Earth years. This forms a 5:2 orbital resonance with Saturn because it is 2/5 the orbital period of the planet. Jupiter‘s elliptical orbit is inclined 1.31 degrees The elliptical orbit of Jupiter is inclined 1.31° compared to Earth. Jupiter’s eccentricity is 0.048.

Because of this the distance between Jupiter and the Sun differs by around 75,000,000 km between its perihelion and aphelion. The perihelion is the nearest point and the aphelion is the farthest point of the planet when on the orbital path.

Jupiter’s axial tilt is small compared to its size. It is only 3.13 degrees. This is the reason why Jupiter has little seasonal changes when compared to that of Mars and Earth. Jupiter has the fastest rotation in all of the planets of the Solar System.

It rotates on its axis at less than ten hours, so a basic day on Jupiter is less than 10 Earth days. This is the reason for the equatorial bulge that can be seen from the earth through telescope. The rotation of Jupiter requires centripetal acceleration. Jupiter is not a completely solid body and because of this the upper atmosphere does its own differential rotation. Its rotation is five minutes longer than its equatorial atmosphere.

There are three systems that are used as frames of reference when graphing the movements of the features of Jupiter’s atmosphere. These are Systems I, II, and III, which are the latitudes on Jupiter’s surface.

Comments - 13 Responses to “Orbit and Rotation of Jupiter”