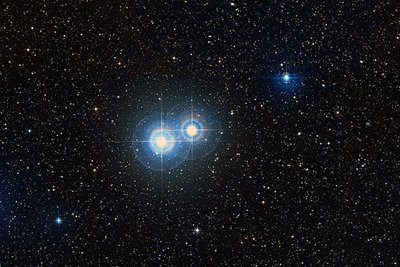 Stars are decorative fixtures in the night sky. Constellations make great wallpaper as it resembles an artwork crafted in the vast universe. But within these bodies are revelations of mystery, beauty and creativity.

The vast number of stars in the universe, there are binary or multiple systems. These are essential for astronomers to be able to measure the mass of stars. There are several types of binaries which include Visual, Eclipsing, Spectroscopic and Multiple star systems. An Optical double, which is sometimes called a binary star, is really not binary in nature.

Optical doubles are not real binary stars because they do not orbit each other. These are just pair of stars that appear exceptionally close together in the sky even though they have different distances on earth. They are also an illusion made by a possible alignment of stars. They are considered rarer than true binaries.

Giovanni Battista Riccioli, an Italian astronomer, observed the first double in 1650. In fact, the constellation Ursa Major’s two stars, the Mizar and Alcor form an optical double. Other astronomers followed, like Galileo and Robert Hooke, who discovered one of the first double-star systems.

Comments - One Response to “Optical Double”