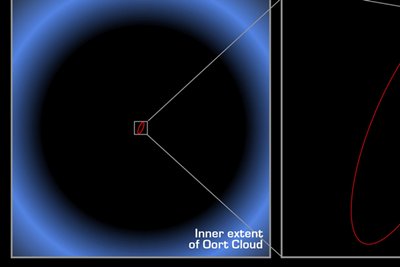 The Oort cloud is an enormous spherical cloud composed of comets and dust. Its size is hypothesized to be at 2000 or 5000 to 50,000 astronomical units (AU)-an AU equals the distance between the earth and sun. The sphere is so huge that its border is closer to the Earth’s nearest star as opposed to the sun itself. The spherical shape of the Oort cloud is a result of the gravitational interaction of nearby stars and galactic tides (tidal force experienced by bodies as affected by the gravitational field of the galaxy) that make cometary orbits more globular.

Matter in the Oort cloud is mostly composed of ice particles that vary from water, ethane, hydrogen cyanide, carbon monoxide and methane. Dutch astronomer Jan Oort hypothesized its existence in 1950. He believed that directly observing a cloud cannot be possible with telescopes. This is because the comets that consists it are too minute and far apart. Trillions of comets are projected to be in the Oort cloud, with a total mass of 100 times compared to Earth.

Though its existence has not yet been confirmed, the reality of the Oort cloud is widely embraced by the scientific community. At present, the 0377 Sedna, 2000 CR105, 2006 SQ372, and 2008 KV42 are the known trans-Neptunian objects that are considered probable inner Oort cloud members.

Comments - One Response to “Oort Cloud”