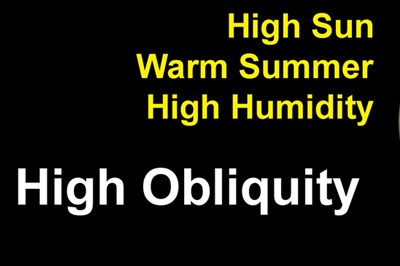 There are many terms in astronomy, and there is no doubt about that. One of which is the concept of Obliquity, more commonly known as the axial tilt.

The angle between a certain rotational axis of an object and the specific perpendicular line in regards to the object’s orbital plane is better known as its obliquity. In the solar system, the axial tilt of the earth is known formally as the obliquity of the ecliptic, since the name of the planet’s orbital plane is called the ecliptic plane. In formulas, it is represented by the Greek Character “Ε” or epsilon.

Apart from this, a planet’s axial tilt causes the seasons like spring or winter. This is due to the change of orientation of a planet’s obliquity, though the actual angular degree of tilt does not change, and the rotation moves until it reaches 360 degrees or one complete revolution. Thus, specifying which season it is now.

The planet earth has an approximate axial tile of 23.4 degrees. The axis stays tilted in the direction pointing to the stars for the entire year. This implies that a certain hemisphere — or half of the earth is in the direction towards the sun, half a year or half an orbit later, the other half will be now in the sun’s direction. Also, the current hemisphere that is facing the sun tends to have longer hours of sunlight.

Comments - No Responses to “Obliquity”