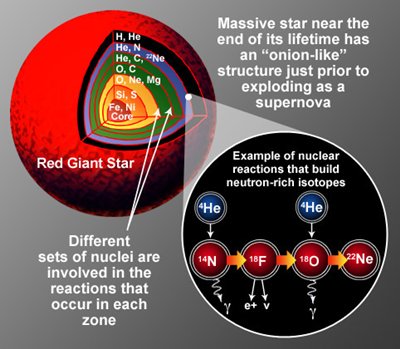 Apart from Nuclear Fusion in stars, there is also what is called as Nucleosynthesis. This is defined as the production or creation of new elements through the process of nuclear reactions.

In this process, as more and more particles fuse together, such as the atoms of hydrogen and helium in stars, the new product of the fusion can become unstable and eventually split up or break apart. When the chemicals hydrogen and helium mix up, it then becomes the particle or isotope known as Be-17, which has the unstable atomic mass of 8. And it’s lifetime in approximately 17 seconds only due to its unstable nature.

There also four types of Nucleosynthesis namely the Big Bang, Stellar, Explosive Nucleosynthesis, and Cosmic ay Spallation. Big Bang Nucleosynthesis is the reaction that came within three minutes from the formation of the Universe. It is also responsible for the high levels of different elements, especially Helium in outer space. Stellar on the other hand, is the chemical reaction responsible for forming carbon to iron in the star systems.

The explosive type is the reaction that makes a supernova or nova happens. Due to this kind of reaction, a certain supernova creates new elements based on the intensity of the burst. And lastly, Cosmic Ray Spallation is the reaction credited for producing the elements of lithium, beryllium, and boron in space and is considered to be the one producing the lightest elements in space.

Comments - No Responses to “Nucleosynthesis”