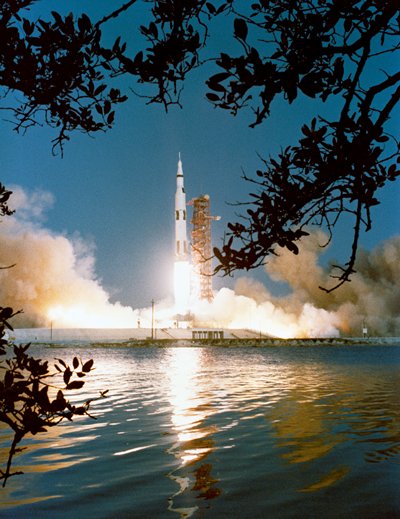 Launched on April 4, 1968, Apollo 6 was the last unmanned test flight in the Apollo Space Program. The mission lasted for about 10 hours and despite the malfunctions, it proved to NASA that a manned spaceflight is a possibility.

Right from the start, Apollo 6 experienced a lot of problems. Two minutes after lift off, it experienced extreme oscillations for half a minute. But George Mueller of NASA explained that these oscillations were just a normal characteristic for rocket engines that undergo combustion, causing fluctuations in the thrust and in turn create oscillations. Aside from those suspicious oscillations, cameras recorded several pieces of the rocket starting to fall off a little after two minutes into the flight. Problems started to rise in the engines. There was a problem with the second stage and then Engine 2 shut down. Not long after, Engine 3 shut down as well. It was a disaster for the major engines but the command module onboard was able to compensate the damage and was able to burn the rest of the stages successfully.

Due to the malfunctions that happened in Apollo 6 mission, spacecraft modifications were made. Helium gas from the pneumatic control system was redirected to the fuel lines, feed lines, and oxidizer pumps. By filling these cavities, pressure oscillations were dampened and calmed at best. The problem with the adapter was due to its honeycomb arrangement. The trapped air and water expanded as the rocket accelerated through the atmosphere causing the adapter surface to fall off. As a solution, small holes were drilled to allow the expansion of material.

Cameras filmed this feat at high speed creating a slow motion 15 times than the normal speed in order to capture the extremely fast sequence of events. Camera capsules were able to record the lift off and the separation of the first stage. They reached 200,000 feet in altitude and parachuted down to the ocean. On the day that Apollo 6 was launched, Martin Luther King, Jr. was shot and killed in Tennessee causing the media to flock over. For this reason, there was little press coverage on this space mission.