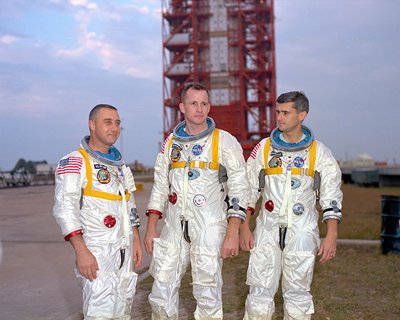 Originally named Apollo 204, the Apollo 1 was to be the first manned spacecraft in the history of mankind. Its creation was to investigate the design of its control facilities and to examine the effectiveness of its launch assembly and operations. If all went well with the spacecraft’s performance, engineers estimated that it should have lasted 14 days in orbit to achieve its mission goals.

The selected crew members for this manned spaceflight were Lt. Col. Virgil Grissom as command pilot, Lt. Col. Edwards White as senior pilot, and Navy Lt. Roger Chaffee as pilot. Regrettably, these American astronauts never got leave for space as tragedy struck before the space shuttle even took off. On the launch pad during the pre-flight test for Apollo 1 on February 21, 19687, these three men lost their lives when a fire swept through the command module of the spacecraft. The fire was contained in the cockpit but unfortunately, carbon monoxide asphyxia (inhalation of smoke) killed the astronauts inside. The recovered bodies were found to have also suffered from third degree burns due to the intense heat. The fire has melted some portion of the astronauts’ space suits and hoses that connect to the life support.

A review board was immediately formed to determine the cause of the tragedy that claimed the lives of the three men. The source of the fire was never conclusively identified but there were theories as to the cause of the mishap. They attributed it to construction flaws and carelessly assembled command module. The exhaustive investigation of the fire and extensive redesigning of the command modules postponed any further manned launch. Scheduled manned flights were suspended by NASA officials for nearly a year.

Because of what happened, the command module underwent major redesigning. The scientists and engineers paid a lot of attention to the cabin atmosphere throughout the entire process of launching. Oxygen and nitrogen concentrations were carefully adjusted in the cabin at varying internal pressures. Flammable materials were faced out and replaced with non-flammable counterparts, wires and plumbing pipes were coated with insulation, and more than a thousand wiring problems were corrected. To prevent the space suits from burning, nylon was replaced by a non-flammable, highly heat-resistant fabric made from woven fiberglass and coated with Teflon. This fabric was called Beta cloth.

The tragedy that was Apollo 1 pushed the great minds to take a closer inspection on all the things that went wrong and used that opportunity to think of better solutions. The changes in the design were successful and in spite of the suspended take offs, the Apollo space program resumed to launching spacecrafts with a higher success rate.

Comments - 3 Responses to “Apollo 1 – Trial and Error to Success”