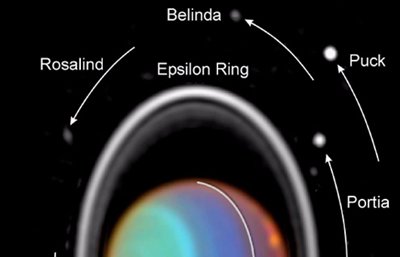 Uranus has 27 confirmed natural satellites in its orbit. Unlike most moons named after Greek mythological characters, the moons of Uranus are named after the people in William Shakespeare and Alexander Pope’s literary works.

Titania – named after the queen of the fairies in Shakespeare’s “A Midsummer Night’s Dream”. It was discovered in 1787 by William Herschel. Titania is composed of rock and ice and its surface is dark and mildly red. It is the largest of the moons of Uranus with an estimated 1600 km diameter.

Oberon – Second only to Titania in mass and size. It is also named after a character in “A Midsummer Night’s Dream”- the king of fairies. It was discovered in the same year as Titania William Herschel. It has an equatorial radius of 761.4 km.

Umbriel – It was discovered by William Lassell on October 24, 1851. It was named after a character in “The Rape of the Lock” by Alexander Pope. Umbriel is mostly made of ice with few portions of rock. It has a mean radius of 584.7 km.

Ariel – The brightest of the moons of Uranus. Aside from craters, canyons are all over Ariel’s surface much like Mars. It was discovered along Umbriel in 1851 by William Lassell. Ariel is the name of a character in “The Tempest” (Shakespeare) and “The Rape of the Lock” (Pope). It has a 472 km diameter.

Miranda – It has a diameter of 470 km. Among the moons in the solar system, Miranda has a very unique feature. Its surface seems like it has been put together in a random fashion. Astronomers believe that Miranda has shattered numerous times before and has been reassembled. However, there is no conclusive proof for this theory.

Comments - 15 Responses to “Moons of Uranus”