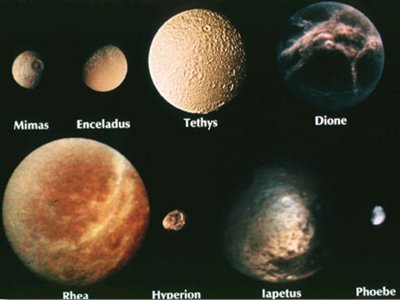 There are 62 moons orbiting Saturn. The moons of Saturn vary not only in size but also in composition and shape. The largest of the moons of Saturn is the aptly named Titan, more than 5,000 km across and is bigger than Mercury.

There are 7 major moons of Saturn and the rest are grouped based on the mythology from which it is taken. Most of the minor moons of Saturn are less than 1 km across and are icy celestial bodies that closely resemble planetary rings.

Titan – The largest of Saturn’s numerous natural satellites measuring 5,150 km across. The surface of Titan is mostly rocky materials and ice and its atmosphere is mostly composed of nitrogen, which could create a climate similar to that of ancient Earth. It is believed that Titan’s environment can nurture extraterrestrial microorganisms.

Rhea – Named after the mother of the Olympian gods in Greek Mythology. It is the second largest moon of Saturn measuring 1,530 km across and is the 9th largest natural satellite in the solar system

Iapetus – With a diameter of 1,470 km, it is the 3rd largest moon of Saturn. It was discovered by Giovanni Cassini in 1671. It has a distinct feature of having a bright and dark hemisphere.

Dione – The 4th largest moon of Saturn named after a vague character in Greek Mythology. It measures 1,122 km in diameter and is the 15th largest moon in the solar System. Despite its size, its mass exceeds all the moons smaller than itself combined.

Thetys – Discovered by Giovanni Cassini in 1684, this moon named after a titan in the Greek Mythology has a 1,070 km diameter. Like Dione and Rhea, the surface of Thetys is mostly icy.

Enceladus – Discovered by William Herschel in 1789, it has a diameter of 500 kilometers. It has a very reflective surface and it reflects most of the sunlight that hits its surface.

Mimas – Also discovered by William Herschel in 1789. It has a 400 km diameter and has low density that led scientists to believe it is mostly made of ice with very little percentage of rocks.

Comments - 20 Responses to “Moons of Saturn”