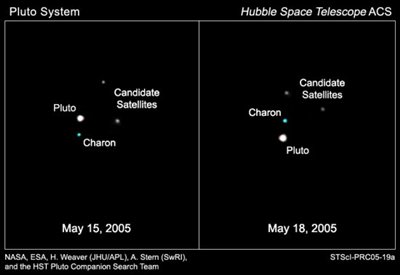 There were three known moons of Pluto: Charon, Nix and Hydra. At least until July 2011, then another one a year later in 2012 that two additional moons were seen through the Hubble Telescope. The two newly discovered moons are natural satellites. That brings the total moons of Pluto to five.

The dwarf planet was discovered in 1930. At first, scientists thought that Pluto did not have a satellite in its orbit. This would go on about 50 years until an American astronomer named James Christy discovered Pluto’s largest moon on June 22, 1978. Decades after the first Pluto satellite was discovered, two more moons were seen by the Hubble Space telescope on June 2005.

Charon – also known as Pluto I, Charon is a little more than half the size of Pluto measuring 1.2 km across. It is the first, and the largest, of the three moons of Pluto to be discovered. It was discovered when James Christy was examining images of Pluto taken on photographic plates. Christy noticed an irregular bulge that recurs periodically on the image of Pluto.

Since the bulge periodically appears on the surface image of the planet, scientists realized that it could be a celestial body orbiting around Pluto. The name came from the boatman in the river Styx that guides the spirit of the dead to the underworld.

Hydra and Nix – Previously known as S/2005 P1 and S/2005 P2, respectively. It was discovered thanks to the images taken by the Hubble Space Telescope. Two astronomers made independently discoveries on the remaining moons of Pluto – Max J. Mutchler on June 15, 2005 and Andrew J. Steffl one month after. It was later announced on October 31, 2005.

There haven’t been any direct measurements taken but scientists estimate that Hydra is about 61 km across while Nix measures 46 km across. When it was discovered, Hydra was shown to be brighter than its twin, which suggested that it is the bigger of the two by about 10 percent.

Hydra was taken from the 9-headed serpent that Hercules slew while Nix is the Greek goddess of darkness and night and the mother of Charon.

Comments - 8 Responses to “Moons of Pluto”