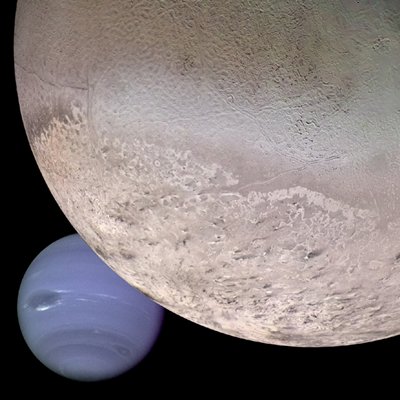 There are 13 moons discovered to orbit around the 8th planet of the solar system, Neptune. The first, and the largest, moon, Triton, to be discovered was found just 17 days after the planet itself was discovered. After Triton’s discovery, it took another century for astronomers to find the second moon of Neptune.

The moons of Neptune are classified as Regular Moons and Irregular Moons. Regular moons are closer to the planet, some even closer than Neptune’s planetary rings. Irregular moons orbit farther from Neptune.

Galatea is the fourth moon closest to Neptune and has a surface that displays no geological changes. It is believed that Galatea is a piece of one of Neptune’s ancient satellites. Galatea has been discovered to slowly move towards the surface of Neptune, which indicates that it will either crash with Neptune, or break up into planetary rings. Larissa and Proteus are the two largest of Neptune’s regular moons. Larissa has an estimated diameter of 200 km while Proteus is estimated to be around 150-250 km.

The irregular moons of Neptune consist of Halimede, Laomedia, Nereid, Neso, Psamanthe, Sao and Triton. Triton is the largest moon with a 2,700 km diameter and is larger than the dwarf planets of the solar system Pluto and Eris. It has such a great mass that it accounts for 99.5% of the mass to orbit Neptune, moons and rings combined. Scientists believe that there may be liquid water inside Triton’s surface that they refer to as “ocean”.

Comments - 12 Responses to “Moons of Neptune”