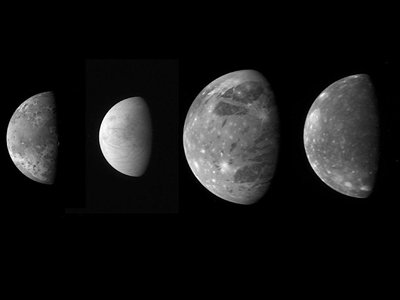 There have been 63 moons discovered hovering around Jupiter. It is divided into different groups: the Main group or Galilean moons, the Inner satellites or Amalthea group, the Himalia group, the Carme group, the Anake group and the Pasiphae group. Three known satellites are not member of any group – Themisto , S/2003 J2 and S/2003 J3.

Galilean Moons – are the four moons of Jupiter discovered by Galileo Galilee in 1610.

Io – With a diameter of 3,642 km it is the 4th largest natural satellite in the solar system. It was named after a priestess who became one of Zeus’ human lovers. It has over 400 volcanoes and is the most geologically active celestial body in the solar system.

Europa – Is only marginally smaller than Earth’s moon having a 3121.6 km diameter. Its atmosphere is composed mainly of oxygen. Its surface is mostly made of ice and it has the smoothest surface in the solar system.

Ganymede – It is the largest moon in the solar system with a 5262.4 km diameter. Though it is larger than Mercury, Ganymede only has half the planet’s mass.

Callisto – It is the third largest moon in the solar system with a 4820.9 km diameter. It is the least dense Galilean moons being composed mainly of rock and ice.

Metis – The moon closest to Jupiter and due to tidal acceleration it will crash on Jupiter’s surface eventually.

Adrastea – It is the first moon to be discovered with the use of a spacecraft instead of a telescope. Very little is known about this moon aside from the fact that it is tidally locked to the planet.

Amalthea – It was discovered in 1892 by Edward Bernard and was the last moon discovered through visual observation.

Thebe – Like the rest of the Amalthea group, rotates in synchronicity with its orbit, which means it always faces on side away from the planet.

Comments - 18 Responses to “Moons of Jupiter”