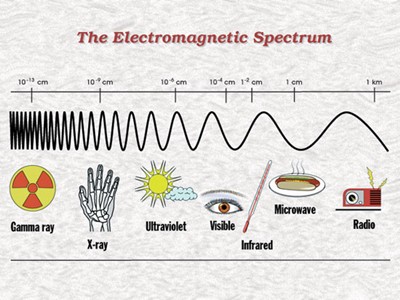 Although the public is familiar with microwaves as a tool to heating food, generally microwaves are minute wavelengths of electromagnetic energy that can be measured using centimeters, and are used in a broader sense. It is even believed in theory that microwaves are the cooled and calmed form of gamma radiation. These waves have properties that allow them to transmit information from one end to another because of their ability to penetrate different elements, such as smoke, snow, clouds, and rain.

These wavelengths also travel as fast as the speed of light, but have longer wavelengths than that of visible light. Because of this ability, microwaves are widely used to transmit information such as weather forecasts, telephone calls, computer data, radio and television broadcasting, and reception of graphic images. The earth then can be viewed from space through the use of the microwaves; wavelengths are sent bursting from space until they hit an object, which may be a land form, a body of water, or even ice caps, and the radar records the result of this activity. Without microwaves, scientists won’t be able to study the geography of the earth’s surface, transmit different kinds of information, manage the earth’s satellite, and enjoy a good bag of popcorn.