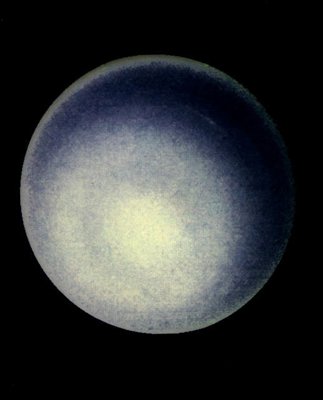 The density of Uranus is 1.27 grams/cubic centimeter. That’s 1 ¼ times denser than water. Density is measured by dividing the amount of mass in a substance by the volume of a substance. Despite being larger than Earth its density is just ¼ of Earth’s and is much more similar to that of Jupiter.

The force of Uranus’ gravity is ten percent less than that of Earth. If an object that weighs 100 pounds on Earth suddenly finds his or herself on the surface of Uranus, they would find that they are ten pounds lighter than they would be on Earth. However this does not necessarily mean that mass is lessened. Remember that the mass is what makes up an object, while weight is the force of gravity acting on an object. Weight varies in the universe.

Despite having a bigger diameter than that of Neptune, Uranus has lesser mass. The reason for this is that the diameter of the planet is measured from its atmosphere. While Uranus has a larger atmosphere, Neptune has a larger, rockier core. Thus, Uranus is deemed larger than Neptune but Neptune has the larger amount of Mass of the two giants.

Comments - 7 Responses to “Mass and Density of Uranus”