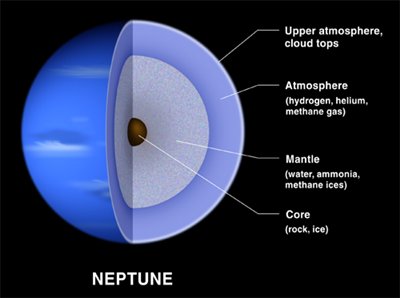 Of the four giant planets, Neptune is the smallest. Its diameter is roughly 30, 755 miles. This is the measurement taken from a point in the atmosphere where the pressure does not exceed 1 bar. Neptune is four times bigger than earth but is just slightly smaller than Uranus. Despite being smaller than Uranus, Neptune’s mass exceeds it by 1.2 times. Its density is 1.639 g/cm. Earth is denser than Uranus. Neptune’s Mass is 10243×1026 kg. Its volume is 6.254 x 10 km3. If you were to put Neptune in a bath tub it would be too dense to float. It will sink right at the bottom. This does not necessarily mean that large planets would automatically sink or is automatically denser than the smaller ones. Saturn, another giant planet of the solar system, which is even bigger than Neptune, would float if placed in a bath tub large enough for it to fit.

Neptune is the fourth largest planet on the Solar System when based on its diameter. It is the third largest planet in the solar system when it is based on its Mass. The reason for Neptune having a larger mass despite having a smaller diameter than Uranus is because Neptune and Uranus are both gas giants. The diameter is measured from the point where the color starts to get opaque. Neptune has a larger and rockier core but its atmosphere is not as far reaching as that of Uranus. The size a planet never determines its mass.

Comments - 14 Responses to “Mass and Density of Neptune”