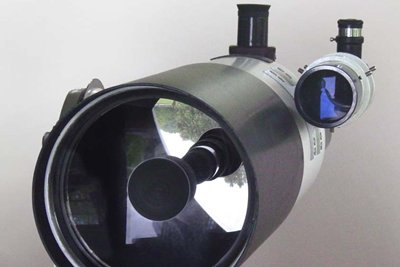 The Maksutov telescope is a catadioptric type of telescope with a unique design that combines a spherical mirror and a weak negative meniscus lens. As a result, the telescope fixes the off-axis aberration problems usually encountered in other designs. The Maksutov telescope was named after the Russian inventor, Dmitri Dmitrievich Maksutov, who came up with the idea of using an all-spherical meniscus corrector plate instead of complex Schmidt corrector plate. He was inspired with the idea of the Schmidt camera which used a negative lens’ spherical errors in order to correct the spherical primary mirror’s opposite errors. He was able to simply the fabrication and used all-spherical elements. He came up with an idea of using a corrector from a single glass type made with weak negative meniscus called achromatic corrector. The design is able to correct chromatic aberration.

Maksutov patented the design in 1941. In May 1944, he first published the design in the Journal of the Optical Society of America. The paper he wrote was entitled “New Catadioptric Meniscus Systems”. Since then, many professional and amateur designers started to experiment on different variations and wide-field camera designs. And since the 1950s, Maksutov telescopes have been made available on the amateur market.

Comments - No Responses to “Maksutov Telescope”