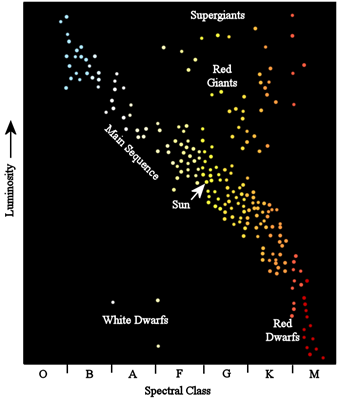 A perfect time to stargaze is during a moonless sky and at a location where there is a minimum of light pollution and sky glow. When we observe stars, we observe them according to their apparent magnitude or the brightness that we see by simply observing using the naked eye. In astronomy, this particular radiant energy is quantified as luminosity, which is the amount of energy released by a star every second and is often expressed in joules per second or watts.

Luminosity can be interpreted in two ways. The most common manifestation of this event is when stars are seen at night. Stars emit light in the visible part of the electromagnetic spectrum, allowing observers to see stars by simply looking up the sky. The other manifestation is radiation and is not easily observed but still make up the total energy emitted by a star. Astronomers calculate luminosity using either a star’s apparent or bolometric magnitude.

A star’s luminosity can tell astronomers about its different characteristics. With this parameter, astronomers can quantify a star’s temperature or hotness, their size or their ability to support life just like our Sun. The energy emitted by a star greatly contributes to our present knowledge about the universe today.

Comments - No Responses to “Luminosity”