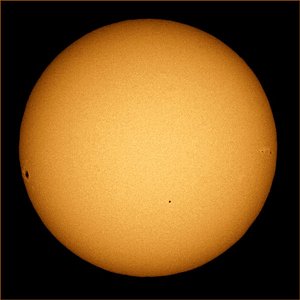 Most celestial bodies can be observed as entities resembling a definite shape when the proper equipment is used. The Sun, when viewed under a solar filter resembles a great big ball without the harmful rays. Most of the stars can be viewed the same way, where it can be seen as a sphere. However, numerous astronomers have detected that the intensity of the image formed by a star slowly diminishes from the center going to out towards the edge of the sphere. These edges are often referred to as limbs and the phenomenon is called limb darkening.

Limb darkening can occur as a result of two effects. The first is caused by the decreasing density of the star as the distance increases from the center, diminishing the intensity seen around the limbs. The second is when the star’s temperature decreases as the distance from the center increases because the radiation that is coming from the star is in fact a function of temperature. These two effects cause the edges of a particular star to darken at the limbs and the center can be observed as the most intense part of the star.

Limb darkening can be calculated using angular measurements associated with the observer and the star being observed.

Comments - No Responses to “Limb Darkening”