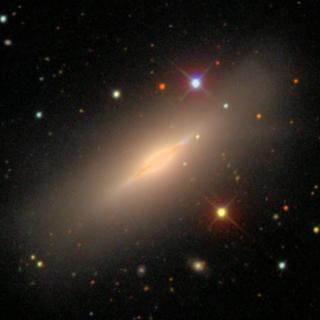 A Lenticular galaxy is basically a kind of galaxy which borders in between an elliptical and spiral galaxy when classified. They are shaped like a disk, and have almost no interstellar matter, and very little formation of stars. There are, however, remnants of small dust particles. A lot of aging stars are present in this type of galaxy.

A Lenticular galaxy is similar in content to an elliptical galaxy. They both have old stars. Their stars are more or less a billion years old. Moreover, there exist a lot of globular clusters. There is little, if any molecular gas, and this explains the lack of the formation of stars.

Furthermore, like other galaxies, a Lenticular galaxy possesses a central bulge and a disc, but lacks spiral arms due to the lack of star formations. These look like a very flat disc.

Because of the faint image of this kind of galaxy, it is sometimes mistaken to be a dying galaxy. The lack of stars seems to boost this theory. The image may also be because of age. Such a galaxy is perceived to be relatively old. Such a galaxy is considered a galaxy that continuously changes.

A Look at Galaxies

Comments - No Responses to “Lenticular Galaxy”