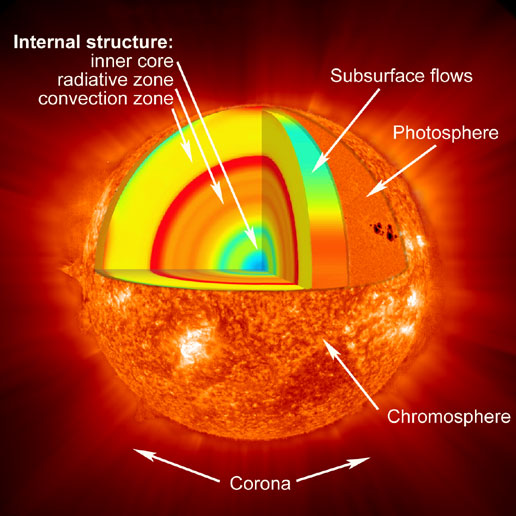 Just like a human body which is made up of different systems that work together, the Sun is also made up of parts that function together to help it maximize its power in the Solar System. The Sun, as one of the heavenly bodies, has different identifiable parts. These parts perform a specific function to keep the Sun alive. The Sun is composed of several layers or regions.

There are some regions in the Sun which can be seen from the Earth and those visible regions of the Sun are part of its atmosphere. Being a ball of hot burning gases, the Sun is composed of several parts: the corona, chromosphere, photosphere, core, Sunspots and prominences. Corona is the outermost layer of the Sun’s atmosphere. It is visible only during the total eclipse of the Sun, and it extends in all directions from the chromosphere.

The chromosphere is the middle layer of the Sun. It is a blanket of glowing gases surrounding the Sun and measuring 16,000 kilometers thick. It is known as a thin zone of electrified matter. This zone is not visible because of the very bright light emitted from the chromosphere. However, when there is a total eclipse, it becomes visible.

Just beneath the chromosphere is the photosphere which is the third and innermost layer of the Sun’s atmosphere. This photosphere has tremendous clouds of calcium vapor. It is surrounded by a layer of lighter and cooler gases. It is about 128,000 kilometers thick with a temperature of about 5500° Celsius. This layer releases light which reaches the earth.

They appear as dark spots. Prominences are arches of gases billowing out of the Sun’s surface. Without these layers that form an integral part of a star, Sun won’t be able to supply the energy and heat that the living things needed.

Comments - 14 Responses to “Layers of the Sun”