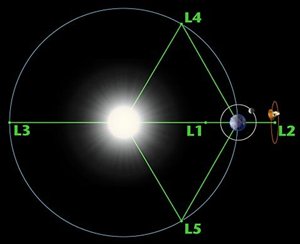 Lagrange points are areas in outer space characterized by gravity along the circular motions in outer space. This phenomenon was theorized by a mathematician from France, Louis Lagrange while studying gravity, most specifically the Three body problem. He aimed to investigate why a third small body would rotate a certain body (Earth), which is also rotating another body (the Sun). Thus, this makes up the five Lagrange points in the Earth Moon system as well as the Sun Earth system.

The first point is L1. This point is based on the fact that if any body orbits closer to the sun, it ought to move faster. L2, on the other hand, is a point, which occurs on the evening angle of the Earth. L2 is a very good place to observe the much bigger universe around. L2 is usually home to a lot of spacecraft missions. L3 characterized as part of a line that is labeled by the Earth and Sun, yet is further than the Sun. What is more, L4 and L5 are positioned at 60 degrees behind the earth. This point is resistant to gravity disturbances. Thus this point is characterized as relatively stable.

Comments - No Responses to “Lagrange Point”