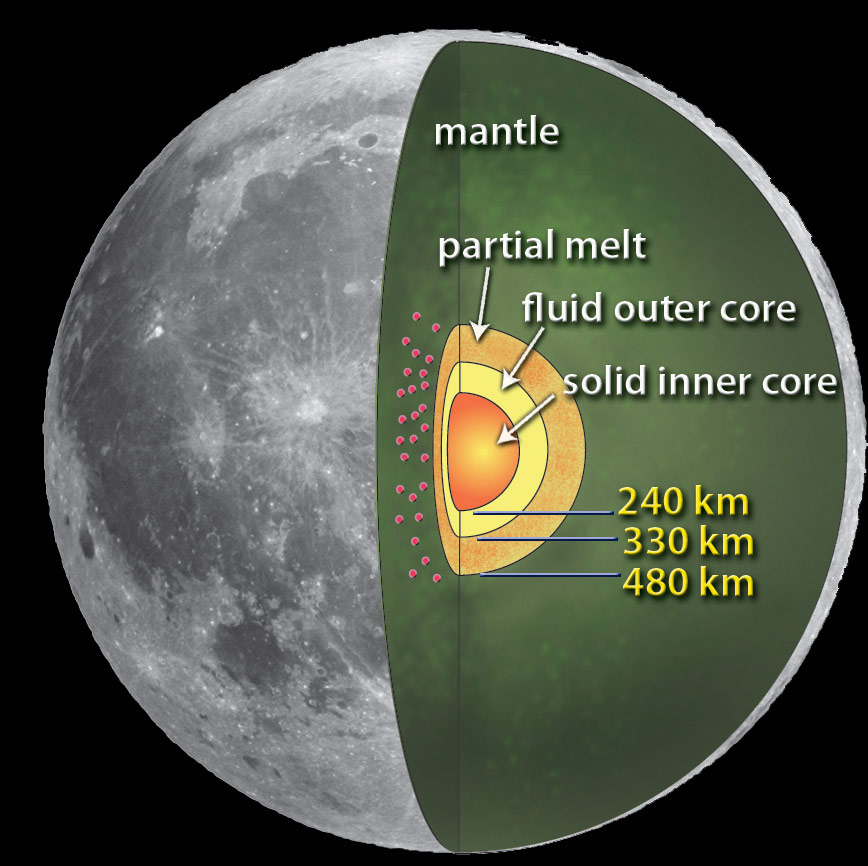 Looking up at the night sky, we can see the bumpy, craggy, outer surface of the moon. We can actually spot the mountains and craters from our vantage point on earth, some 400,000 kilometers (248,548 miles) away. Since the very first landing by Russian astronauts in 1959, moon rocks have been brought back to earth to be studied, and over the past several decades we have been able to gather a lot of information about the surface of the moon, and what lies just beneath.

The Layers of the Moon

Much like Earth, the moon is comprised of layers. There is the hard outer crust, which is rocky and dusty. Just beneath the outer crust lies an outer mantle, then an inner mantle, and at the very center is the core.

The outer mantle of the moon is comprised of another rocky layer. This rock is softer than the layer on the outer crust, but it is not hot enough to flow.

This layer of rock is actually so hot, it becomes molten. The rock in this portion of the moon flows as a liquid, and creates seismic waves which can create volcanic eruptions and what we consider earthquakes. Still, this liquid layer of rock is not nearly as hot as what lies underneath the Earth’s crust, and does not generate enough heat to warm the dark side of the moon during the different lunar phases.

The core of the moon is comprised of a very solid piece of rock. Again, it is much smaller than the Earth’s core, and it is made up of an iron-like substance. The core of the moon creates a magnetic pull which is responsible for creating the tides of the ocean, though it is only one ten-millionth of the Earth’s gravitational pull.

The moon is a fascinating body in the night sky. It is the 5th largest satellite in our solar system, and much like the earth consists of several layers of rock at varying temperatures and textures.

Comments - No Responses to “Inside the Moon”