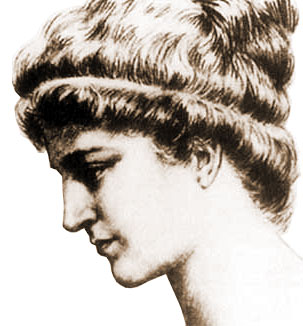 Hypatia is unique among many ancient scholars and philosophers, she was a woman. But her gender is not her sole claim to fame. She was a great teacher, scholar, mathematician, philosopher, scientist, and compiler and preserver of important scientific writings.

Hypatia was born in 370 AD in the center of learning that was Alexandria, Egypt. Her father was Theon, a famous mathematician-philosopher. Undoubtedly, her learned father trained and taught her, and together, they later collaborated in writing certain commentaries to prominent scientific works, such as Ptolemy’s comprehensive astronomical writings. On her own, Hypatia herself authored similar commentaries on important writings, making them more accessible and understandable to many people. Examples of these were her commentaries on Apollonius’s Conics and Diophantus’s Arithmetica.

In time, Hypatia became the director of a Platonist school in Alexandria, and she became a famous teacher and educator. She was an authority on many subjects– primarily philosophy, Neoplatonic thought, mathematics and astronomy–and she is described as a very eloquent and charismatic lecturer.

She also made contributions to the mathematics, and was the first woman to do so. Other scholars asked her advice on many things, including, on some occasions, how to construct an astrolabe and a hydroscope. As a philosopher, she espoused Neoplatonic beliefs. Among these was the belief that ultimate reality was beyond the grasp of human intellect and words, and that it had to be mystically experienced. Nonetheless, her lectures had a very strong scientific emphasis, which made her stand out from earlier advocates of Neoplatonic thought.

Hypatia died in March 415 under gruesome circumstances. Some accounts say that she was murdered by fanatical Christian monks. Others say that she was attacked by an angry religious mob. Apparently, Hypatia was accused of being a witch or a proponent of pagan beliefs. At that time, women who demonstrated great learning and scientific knowhow were apt to be singled out as witches, because their progressive ideas were a threat to the prevailing religious and superstitious way of life.

Hypatia led a life full of fascinating intellectual accomplishments. For many people, she epitomizes the fearless and progressive attitude of a true scholar. She has inspired many modern writers to compose stories, novels and even movies about her.